have been added to your cart. Checkout View Cart 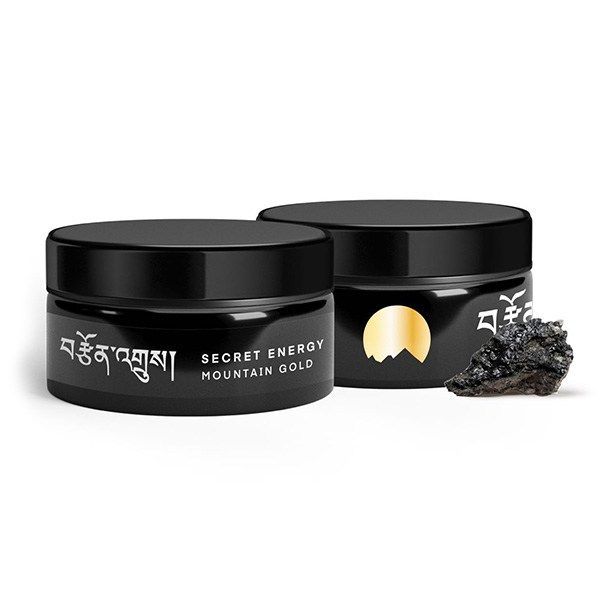 Discover why tribe loves Secret Energy Mountain Gold Shilajit. With over 85+ minerals in ionic form with fulvic acid, our Shilajit is harvested in Ladakh at elevations of over 3000 meters. The raw substance is processed through an elaborate series of Ayurvedic stages to produce the pure elixir found here. Join the expansion and order your diamond of the herbal world today!

High up in the Himalayas, a sacred substance sparkles in the sun, oozing from the rocky terrain. Called Shiljat, this powerful and mysterious mineral-rich resin has been revered by our ancestors for thousands of years and is said to be able to treat every curable ailment known to man.

Freshly harvested at over 3000 meters from the Ladakh region, the raw resin is processed through an elaborate series of Ayurvedic stages to produce the pure elixir you will find here. You will receive your potent Secret Energy Mountain Gold Shilajit in a miron glass container to avoid contamination by light and various harmful waves.

Shilajit is a highly concentrated compression of biomaterial formed over millennia. As such, it is an extremely rare and precious natural substance. Many scientific studies indicate Shilajit’s unique mineral makeup supports longevity and virility while preventing a long list of degenerative diseases.

Shilajit contains over 85 minerals in ionic form, including humic acid and fulvic acid. Its remarkably high fulvic acid content is one of the factors that makes Shiljit so effective and unique. As a rule, cell membranes will resist infiltration by foreign substances (both ‘good’ and ‘bad’), which is why our bodies have a hard time absorbing many supplements. Fulvic acid will actually trigger cell membranes to drop their defenses, allowing fast and complete delivery of all the many important minerals found in Shilajit.

Many eastern cultures believe Shilajit is the real fountain of youth. In northern India, lore has it that Shilajit was derived directly from Lord Shiva’s body and given to king Chandra Varma to restore his youth and vitality. Other lore says that Shilajit was created from the ‘sweat of the gods mixing with The Divine Nectar’. These stories certainly speak to the potency and mystical nature of this rare and sacred element. Shilajit is the prime substance for building Qi and increasing the potency of your spinal fluid.

SHILAJIT CAN HELP WITH…

Make sure your Shilajit is legit!

Being such a rare and valuable substance, it’s no wonder most of the Shilajit being sold is of poor quality and even fake. According to some estimates, only 1% of Shilajit is actually the real stuff!

The best way to ensure you are getting high quality, pure shilajit is to buy in resin form- as powders and capsules include fillers or are often fake. Even resin can be fake or impure, so always purchase your Shilajit from a company you trust. Secret Energy only delivers the highest quality expansion, period.

We place time, wisdom, and intentions in all we do as a reflection of the perfect Self. All is Self.

SUGGESTED USE: 1 peppercorn size amount in the morning or before a workout. Do not exceed 2 peppercorns per day.  For maximum absorption allow to dissolve in warm liquid first and then ingest.