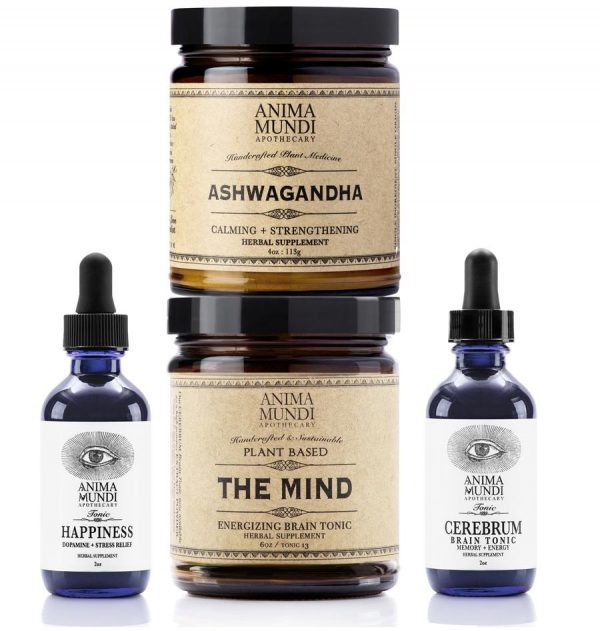 One of India’s greatest botanical and adaptogenic treasures is Ashwagandha. Popularly known as Indian Ginseng, its very well known for its ability to calm, soothe and strengthen the body. It serves many purposes and benefits many-body systems, including the immune, neurological, endocrine and reproductive systems. Its clinically studied to help fight depression, boost brain health and boost fertility and testosterone in men and women.

In Ayurveda, Ashwagandha belongs to a sub-group of rasayanas, or super-elixirs, known as medhya rasayanas, which refers to the mind and mental/intellectual capacity. Herbs that fall under this category are considered deeply healing to the mind and emotional constructs.

And so much more! There are tons of folk-based studies that not only is it considered a heal-all, its known for its mind boosting and spiritual properties within Ayurveda. Stay tuned via the blog to read more about this precious adaptogen.

The herbs in this formula have been extensively studied for their ability to stimulate nerve growth factor (NGF) which inhibits brain dysfunction associated to potential neurological diseases. This formula relieves a depressed system caused by over-stressed and under-nurtured patterning, creating a deep adaptogenic platform for regeneration.

ESSENTIALS:
*Our Lions Mane is organically grown in Washington State at a small organic and Non-Gmo farm.

*Our Brahmi, and Holy Basil are organic and sustainably grown in India. We work directly with the farmers in India to ensure that its an excellent harvest produced under our own standards. Our golden Gingko leaf is grown in North America.

Our happiness tonic is an all organic and wildcrafted tonic that helps stabilize hormone function, serotonin and dopamine, as well as providing a soothing effect on the nervous system. Our formula is a mix of adaptogens, such as rhodiola and ashwagandha, with powerfully supporting happy herbs* like st.johns wort, mucuna and albizzia. These herbs together create a synergistic powerhouse for relieving stress, anxiety and depression.

*”Happy herbs” are herbs commonly used for their serotonin and/or dopamine regulating effects.

*Read up on our blog for excellent oxygen-rich pairings to elevate the potency of the formula.

Read up on the participants of this formula:

The active compound in Mucuna is the levodopa or L-dopa. This bioactive chemical is a precursor to several neurotransmitters, including adrenaline, noradrenaline, and dopamine. Mucuna pruriens has significant antioxidant action that works in tandem with L-dopa to promote brain health. [3] When L-dopa crosses the blood-brain barrier, it helps to increase brain levels of dopamine, an essential neurotransmitter associated with regulating mood and cognition. [4] Research also suggests that antioxidants are helpful for defending against oxidative damage by free radicals.

Popularly known as Mimosa, is a beautiful tree with pink pom-pom flowers. “Both the bark and the flowers of Albizia are used as a calming sedative in Oriental traditional medicine. Categorized in the Chinese Materia Medica as a calming spirit herb, the bark is thought to ‘anchor’ the spirit, while the flowers lighten it. The flowers have also been used for the treatment of insomnia, amnesia, sore throat, and confusion in Oriental traditional medicine as well as depression, melancholy, and anxiety.” – Michael Tierra, L.Ac.

St. John’s Wort has become popular again as an antidepressant. It contains several chemicals, including hypericin, hyperforin, and pseudohypericin, which are thought to be the major sources of antidepressant activity.

Neurotransmitters are chemicals that carry messages from nerve cells to other cells. Ordinarily, once the message has been delivered, neurotransmitters are re-absorbed and inactivated by the cells that released them. Chemicals in St. John’s wort may keep more of these antidepressant neurotransmitters available for the body to utilise. Multiple studies have shown that St. John’s wort may be effective in relieving mild to moderate depression, although maximum antidepressant effects may take several weeks to develop. St. John’s wort has also been studied for the treatment of other emotional disorders such as anxiety, obsessive-compulsive disorder (OCD), menopausal mood swings, and premenstrual syndrome. *St. John’s Wort is an MAO inhibitor and should not be used with anti-depressants, alcohol /drugs and certain foods.

Ashwagandha & Rhodiola are both the master herbs, known for their powerful “adaptogenic” effects. Adaptogen herbs are known for their ability to protect the body and assist it in adapting to stress in a variety of ways, such as by boosting immunity and improving mental alertness.

Ashwagandha – The strength of a thousand horses

Ashwagandha has also been proven effective in supporting adrenal function helping you overcome adrenal fatigue and chronic stress. Your adrenal glands are endocrine glands that are responsible for releasing hormones (cortisol and adrenaline) in response to stress on your body. If your adrenals are overtaxed due to an overabundance of emotional, physical and mental stress, it can lead to a condition known as adrenal fatigue. Abhwagandha is a master herb in assists in hormone regulation and excess cortisol.

has been used for centuries as a general tonic for both body and mind. Recent studies, including those involving veterans of the Soviet-Afghan war, indicate the herb’s clear ability to relieve PTSD symptoms like anxiety, depression, and trauma and concentration.

Recommended Dosage: 2-3x per day 1/2tsp (30-50drops) at a time. Drink directly or add to your choice of beverage. We recommend adding it your favorite green juice, tea or smoothie.

*Our Rhodiola, and St Johns Wort are cultivated in Northern America. Our Ashwagandha is organically grown in India.